You (the person requesting this file download) fully understand mountain climbing ("Activity") involves risks and dangers of serious bodily injury, including permanent disability, paralysis, and death ("Risks") and you fully accept and assume all such risks and all responsibility for losses, costs, and damages you incur as a result of your participation in this Activity.

You acknowledge that information in the file you have chosen to download may not be accurate and may contain errors. You agree to assume all risks when using this information and agree to release and discharge 14ers.com, 14ers Inc. and the author(s) of such information (collectively, the "Released Parties").

You have read this agreement, fully understand its terms and intend it to be a complete and unconditional release of all liability to the greatest extent allowed by law and agree that if any portion of this agreement is held to be invalid the balance, notwithstanding, shall continue in full force and effect. 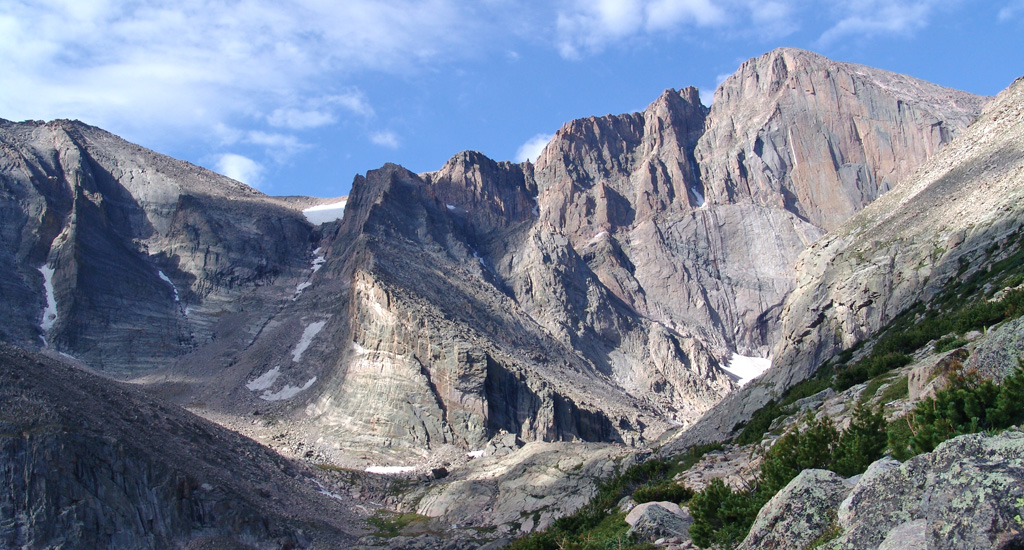 The trailhead is west of Colorado 7 and can be reached from the north or the south. For the northern approach, drive 9.2 miles south from the intersection of US 36 and CO 7 to the turnoff for the Ranger Station. For the southern approach, drive north 10 miles from the junction of CO 7 and CO 72 on the Peak to Peak Highway to the Ranger Station turnoff. From the turnoff drive west 1 mile to the trailhead. Note: Car-camping is not allowed in the parking area. There is a tent campground nearby and a couple of full campgrounds near Meeker Park.

The trail starts on the left side of the Ranger Station. After 0.5 mile you will come to a junction & sign for the Estes Cone trail. Continue left/straight. After you pass the Goblin's Forest camping area, the trail switchbacks through the trees for sometime with Alpine Brook on the left/south side. As you near the kremholtz you will cross the stream on a log bridge, followed by a warning sign on the perils of being above tree line.

Shortly after tree line, the trail switchbacks to the right/north and you will soon get your first view of the Diamond ( 1). From here the trail zig-zags west to the east ridge extending from Mt Lady Washington. Once on this ridgeline, you come to the Chasm Lake trail junction, take it. There is a privy just to the east of this junction. This is where the Loft Route diverges from the Keyhole Route. 2 shows the route from a point slightly down the Chasm Lake trail. There is another privy located in Mills Moraine, the flat area below Chasm Lake. Mill's Moraine is also your last chance for a water source if you brought a filter or tabs. Follow the route arrow to the south side of the Ship's Prow, which places you at the base of the Loft Couloir. There isn't a standard trail from the Ranger's Hut below Chasm Lake to the base of the Loft Couloir, though you might find evidence of recent passings.

Once at the base of the Loft Couloir you will find a beaten path full of loose dirt/gravel ( 3). The path zig-zags up the couloir. 4 is a view looking down the Loft Couloir from part way up with the Ship's Prow on the left. The start of the blue line in 4 is roughly where 2 is taken from. As you get higher in the Loft Couloir you will encounter some class 3 scrambling. 5 is a view in the Loft Couloir slightly before the route exits the gully to climber's left. You will find the exit ramp slightly before the wet rocks seen near the top of 5. 6 is looking down the ramp to the Loft Couloir. The blocks just below this ramp offer some great scrambling. At the end of this ramp you will run into a block that requires a little scramble, and then more ramps ( 7). This area is littered with cairns. In general you want to head up and west, staying south of the steepest part of the Loft Couloir. 8 shows the steep part of the Loft Couloir you are avoiding (with the little snow patch). Once on top of the couloir, you'll find yourself at the southeast corner of a flat and wide boulder field that extends up the Beaver to the north, which ends at the Notch (not visible)( 9). See 2 for locations of the Beaver and Notch.

Hike across the Loft in a northwesterly fashion, to duck around the west side of the Beaver. Towards the northwest corner of the Loft you may start to find some cairns. The cairn that marks the top of the down-climb to Clark's Arrow is circled in 10. 11 is looking back at approximately where 10 is taken from. And 12 is a close up of the same cairn circled in 10. 13 looks down from the cairn. The route from here requires some class 4 moves. 14 looks up from part way down. And 15 shows the ledge that escapes the down-climb gully. If you look over your right shoulder after you have rounded the corner shown in 15 you will see the elusive Clark's Arrow.

You have now entered Keplinger's Couloir ( 16). There is some cairns scattered throughout Keplinger's. From Clark's Arrow the route hugs the east side of the couloir, staying close to the palisades. 17 shows the route from within Keplinger's. 18 looks back at Clark's Arrow from about the same point 17 was taken. 19 shows the route after rounding the corner shown in 17. Near the top of the Couloir you will find the Notch to your right. You want to turn left/west ( 20), up the ramp shown in 21 towards the Homestretch. 22 looks back down the ramp to the top of Keplinger's Couloir. If you are climbing on a weekend in the summer you will see people on the Keyhole route, queuing up for the Homestretch as you near the end of the ramp. You can see a group of people in the center of 23, which shows the last part of the climb. A description of the Homestretch can be found in the Keyhole Route description. 24 is taken from the base of the Homestretch and shows the summit cairn circled in red. If you do not want to wait in line, there is an excellent scramble that parallels the Homestretch to climber's left. It follows this nice cleft shown in 25 (also with the summit cairn circled in red).

Allow just as much time for the Loft Route as you would the Keyhole Route. The Loft Route is shorter, but requires a lot more scrambling. Also, in late spring the Loft Couloir offers a great glisse avenue. 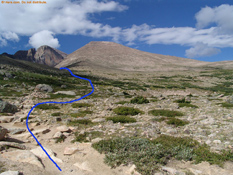 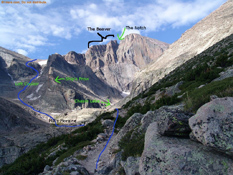 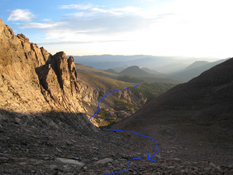 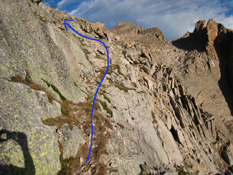 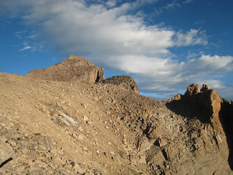 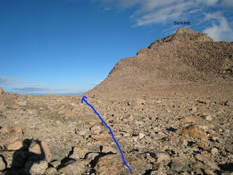 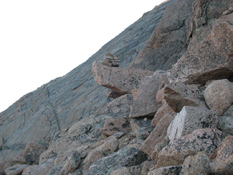 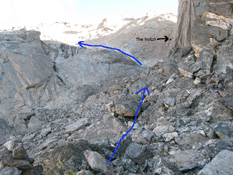 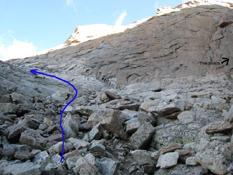 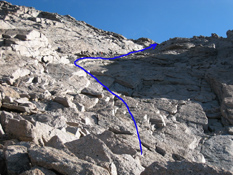 The route Google Map can only be accessed by registered, 14ers.com users. If you don't have an account, you can register in the forum.

Please respect private property: 14ers.com supports the rights of private landowners to determine how and by whom their land will be used. In Colorado, it is your responsibility to determine if land is private and to obtain the appropriate permission before entering the property.
Heading to a 14er soon? Don't forget the 14ers.com mobile app.