Please, no analysis or debate in this sub-forum. This is for memorial threads only.
Post Reply
18 posts

I am sorry to be the bearer of bad news. This afternoon I learned that long-time Longs Peak ranger Jim Detterline has passed away. I do not know many details. The climber who told me said he picked up the news through Facebook chatter. When I told my wife, who is an ex-seasonal ranger in the Park, and who was as shocked as I was, she called the widow of a ranger who was pretty high in the Park hierarchy. The widow called an ex-Park chief ranger who confirmed the news. All he knew about it was that Jim was found in a climbing harness somewhere down near Allenspark where he lived. I do not know the cause of death. Once again, this is all sketchy, preliminary information and I think we will learn more in the coming hours and days. I hope this whole thing is a mistaken rumor, but given the sources we have checked, I suspect it is not. Jim has an almost unbounded number of friends. I imagine a lot of them will be following developments, as I will, on this forum.
"I've found the truest paths always lead through mountains."

Jim was more than just a friend and mentor to me. He was a role model and someone I looked up to. During his 20 years as the Longs ranger he rescued over 1200 people. He was even awarded the Medal of Valor. He was a true hero. I learned so much from him. I will miss him greatly. He had summited Longs Peak 428 times.
Last edited by ap snow on Sat Oct 29, 2016 4:18 pm, edited 1 time in total.
http://www.youtube.com/user/Austinporzo" onclick="window.open(this.href);return false;
Top

"Tongue-tied and twisted, just an earthbound misfit, am I." -David Gilmour, Pink Floyd

"We knocked the bastard off." Hillary, 1953
"It is not the mountain we conquer but ourselves." Hillary, 2003
Couldn't we all use 50 years of humble growth?
-Steve Gladbach
Top

More recently, Jim was also a volunteer with Allenspark Fire Department. They have a nice photo of him on their webpage (as of 10/28/16).

http://allensparkfire.com/" onclick="window.open(this.href);return false;
As I bask in the glorious wake of modest achievement... - Dennis Miller
Top

My condolences to his friends and family. This article was a nice tribute and helped me understand more about Jim.

http://kdvr.com/2016/10/27/jim-detterli ... of-a-hero/" onclick="window.open(this.href);return false;
You cannot stay on the summit forever; you have to come down again. So why bother in the first place? Just this: What is above knows what is below, but what is below does not know what is above. One climbs, one sees. One descends, one sees no longer, but one has seen. There is an art of conducting oneself in the lower regions by the memory of what one saw higher up. When one can no longer see, one can at least still know.
René Daumal
Top

So sorry to hear of this. I had one of the few epics in my climbing career in the early 90's, a 23 hour day on Longs' Notch Couloir. These being the days before beacons, my wife had called the NPS, fearing the worst. As we stumbled into the parking lot, a note on my windshield asked that I stop by the ranger's cabin. So I did, and inside was Jim, patiently waiting for either us or dawn. As I recounted our slow (but heroic!) climb, Jim leaned in and said "You know, there's a reason they call it Longs Peak..." We both laughed, him sagely, me..not so much. Never saw him again, but did see his entries on the register whenever I'd climb Longs in tbe winter. He'll be missed. RIP, Jim.

I'm pretty sure I bumped into Jim on my very first time on Longs Peak. Who else had that 'stache and those jeans on? I had failed to get past the Keyhole in my nascent 14er career and was hanging out at the Boulderfield camping area and there was I think Jim. I was still reeling from what I was sure was a heroic brush with death on the Keyhole route - the route held a little bit of snow you see, and Jim was calmly talking about climbing Cables. Had that big backpack on. He seemed to be in no rush at all to get up. As if it's something he'd done a hundred times before.
The Long Ranger | Bikepack to the 14ers
Top 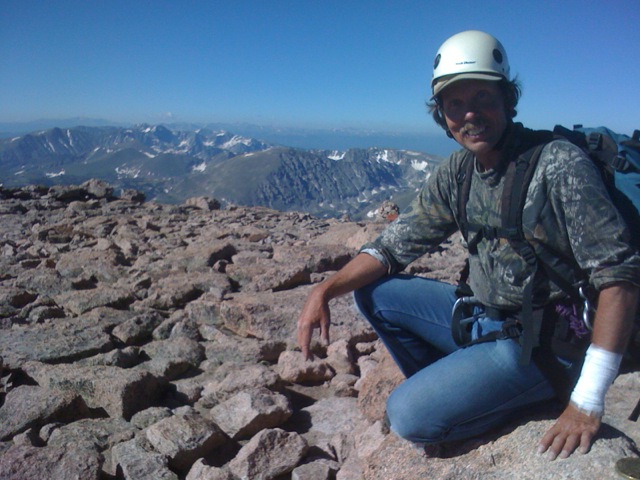 421 times, wow!
After climbing a great hill, one only finds that there are many more hills to climb. -Nelson Mandela
Whenever I climb I am followed by a dog called Ego. -Nietzsche
Top

Truly a legend, almost a mythological creature of Long's Peak. Really sad to hear it. Here is another article from 2007 with a little more background on him and his fight for the hearing impaired in the Park Service. Never met him, would have been awesome to have, but certainly was in awe of his accomplishments.